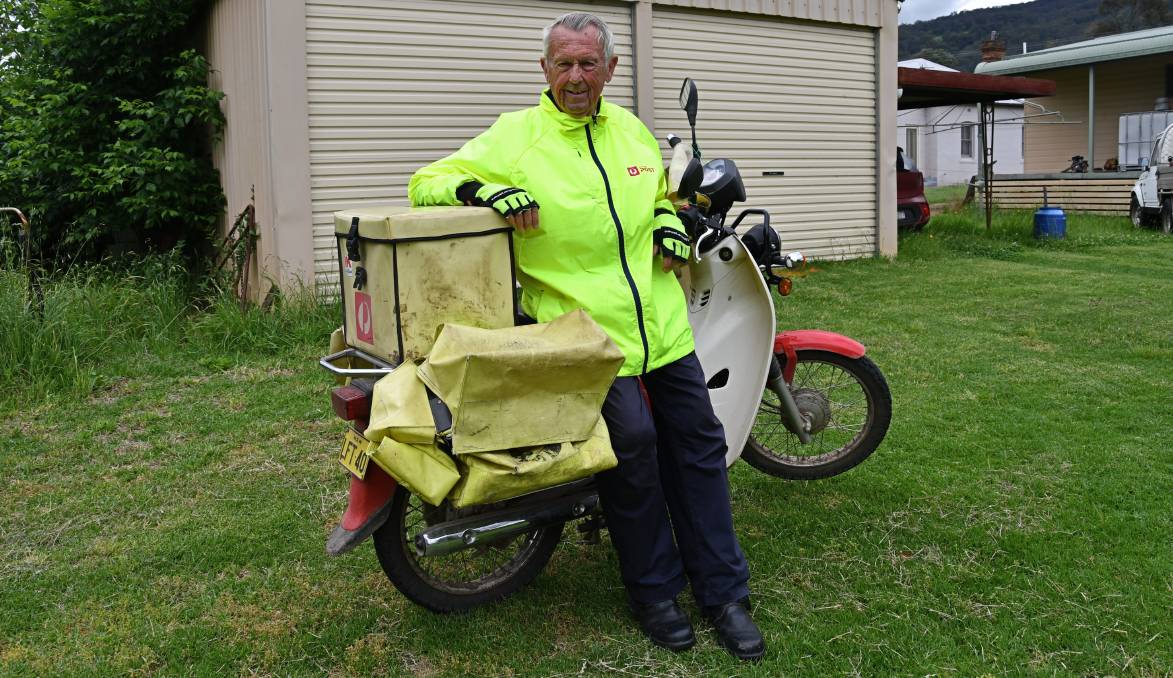 A WISE person once said "if you do something you love, you'll never work a day in your life" and no one symbolises that more than Murrurundi's William Weber.

There are very few constants in regional towns, but for the Murrurundi community in the state's Upper Hunter, there has been one constant for the past six decades.

That constant has been William Weber, who for 60 years has been a pivotal cog in the town as its beloved postman.

Affectionately known as Bill, a lot has changed during his tenure, from the early days of riding a bicycle to the more iconic postie bike, but one thing that hasn't changed is his love for the job.

"There's never been a single day where I've gotten up in the morning and not wanted to come to work," Mr Weber told The Land.

"I think that is pretty special and something worth far more than money.

"To me, the best part is being able to interact with people and I think it is what I will miss the most when I finally do retire at the 60-year mark in July next year."

After leaving school at the age of 15, Mr Weber pursued his early dream of carving out a career in the shearing shed.

However, the intervention of the local postmaster and his mother altered the course of Mr Weber's life for the better.

"I was working in the shearing shed during the week and as a telegram boy at the post office on Saturdays," he said.

"The postmaster had told me there would be a job coming up as a telegram boy before eventually moving up the ranks and at the time, I was only really half interested

"However, as they say 'mum's the word' and she pretty much made it happen.

"She told me to think of the benefits, and I'm reaping those benefits now after 60 years, so I have to say good on you mum."

Despite a short stint as a fill-in telegram boy in Collarenebri, all 60 years of Mr Weber's tenure with Australia Post has been in Murrurundi, during which time he raised a son and a daughter alongside his late wife Carolyn.

The town he has called home all of his life may have changed drastically, but a lot of the fundamental qualities remain the same.

"I think the Murrurundi community is a lot more of a floating community than it used to be," he said.

"By that I mean we have a lot more people relocating from the city to enjoy a regional lifestyle than we ever used to have.

"In the beginning, I would pretty much know 90 per cent of the people in the town, nowadays that's not really the case but I think the positive atmosphere around the town is still the same."

As well as a changing town, Mr Weber also considers himself part of a dying breed.

In his view, he is one of the last Australia Post postmen left in smaller country NSW towns.

"Basically, when the post officer here was sold about 30 years ago, my supervisors told me that once I retire I will be the last Australia Post employees in Murrurundi," he said.

"Our closest post offices are at Scone and Quirindi, other than that, there are very few post offices left in smaller towns like ours as for postmen in small towns like this, I dare day I'm probably the last one.

"It is a bit sad really when you think of the way things used to be where every town had its own post office, but I suppose it is a sign of the times.

"I think the saddest part about it is the fact the post office is a great meeting place for people and I think we've lost that a little bit now."

Given Mr Weber is not officially parking his postie bike for good until July next year, he has already begun turning his attention to his new passion.

On his hobby farm on the outskirts of Murrurundi, Mr Weber has turned his hand to rearing beef cattle.

"I've always had a real interest in livestock," he said.

"Ever since I was young and was wanting to make my way in the shearing shed, I've always really enjoyed working with them.

"I'm only small and dabbling with a few head here and there, but it is certainly keeping me going."

As well as tending to his stock, Mr Weber is also hopeful of spending more time with his grandchildren in Queensland, once COVID-19-enforced border restrictions are lifted.

"It has been a bit challenging not being able to see the grandson and the granddaughter, but it won't be forever," he said.

"I know it will be terrific to see them and I can't wait."

Mr Weber still has more than seven months to go before retirement, but he said he is in no rush to "give it away" because it has kept him going.

"My wife passed away about 29 years ago and I can honestly say the job probably saved me," he said.

"It gave me purpose and helped kept me going, even on the days were you really didn't feel like getting out of bed.

"If she was still here I dare say I might have given it away when I got to 50 years, but that's not the way it went and I'm lucky because the job has really kept me going."

After six decades working for the same organisation the enjoyment of the job has not waivered for Mr Weber and the final months of his storied career will be no different.

The reason is the same as it was at the start, he enjoys what he does.

And as a wise person once said, "if you do something you love, you'll never work a day in your life" and no one symbolises that sentiment more than Murrurundi's last postman.