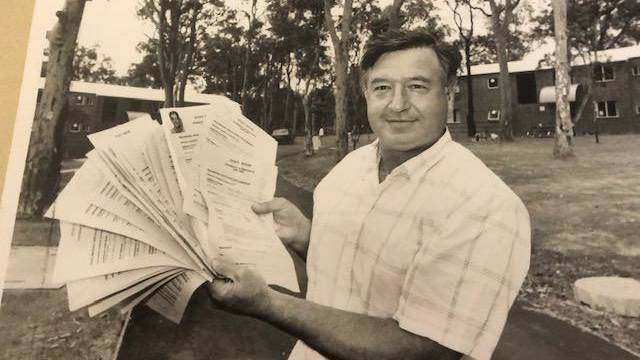 AT the Old Boys' Day rugby union match between the University of Newcastle and Wanderers on Saturday, Bernie Curran was everywhere.

He was in the conversations of the players, the officials, and the spectators. Everyone had a Bernie story.

His name was written on a few jerseys, and the players carried their hearts on their sleeves, wearing black armbands.

And his name, and his love of the game, was there presiding over Oval 1 at the uni. After all, it's known as the Bernie Curran Oval.

He was everywhere. But Bernie wasn't there.

Dr Bernard Curran, AM, king of the rugby club, keystone of university life, and a giant of the Newcastle community, died suddenly on Friday. The father of three and grandfather was aged 76.

"It's a shock to all of us," said Warren Watson, the president of the University of Newcastle Rugby Union Club. "He was the heart and soul of this club." Bernie Curran's jersey on the sideline of the game on Saturday. Picture: Jonathan Carroll

Old Boys' Day usually attracts a crowd, but on this Saturday, the numbers were much larger than usual, according to Warren Watson.

"It's because of Bernie they're all here," he said.

They had come to console each other, to reminisce, and to grapple with the almost unthinkable. The man who had been a player and captain, an official and fundraiser, a supporter and mentor, an inspiration, was gone. Bernie wasn't here.

"I'm devastated," said Doug Absalom, who had joined both the university as a student and the rugby team with Bernie in 1963.

"The 17-year-old Bernie was happy-go-lucky, he enjoyed life," recalled Dr Absalom, who would later be a colleague of Bernie Curran at the university. "He's just a bloody good mate." Also in the crowd, wearing a vintage jersey, was Brian O'Shea, the captain of the 1966 premiership team. He remembered how Bernie Curran, playing breakaway, was injured in that grand final, but he kept going, pushing on for the sake of the team. ,

Which was how Bernie Curran played in life.

"He gave his all on the field, and he gave the same amount of service to anybody and everybody who approached him," said Brian O'Shea. "He was the most accommodating person, and he treated everyone equally. And he was just a go-to man whenever there was a problem." 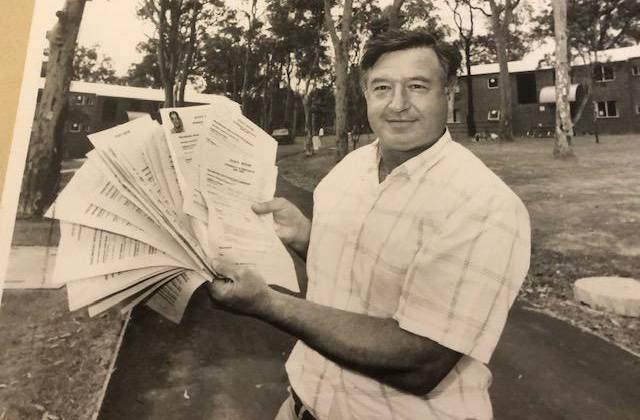 Bernie Curran was one of those precious glass-half-full characters who didn't seem to have the word "problem" in his vocabulary. To him, a problem was a solution in waiting, or a challenge to be relished.

That's partly why people sought him out, not just in rugby circles or at the university but in all walks of Newcastle life. With his ebullience and warmth, Bernie not only made a solution seem possible but inevitable.

"Bernie was always there with a smile on his face," said Doug Absalom. "He had time for everybody. No matter how big or small you were, he took a firm interest in you." Ever since he was a young man, Bernie Curran had been tackling challenges as surely as he did an opposition rugby player.

When he bombed out in the first year of his arts degree, Bernie had to find work, so he headed for the demanding rhythm of life on a dairy farm at Denman. That farmer, Bill Lieschke, loved reading, and he helped reignite in young Curran a passion for words and learning.

In a 2018 interview, Bernie Curran recalled how Mr Lieschke shared books about everything from "Plato to NATO" and then the farmer and his young assistant would discuss what they had read while "milking cows, loading hay and driving cattle".

Bernie Curran returned to university and found his future in ancient history. He graduated with first-class honours in classics. After further study, Dr Curran began lecturing in classics at the University of Newcastle in 1976 and remained an integral part of the teaching staff for 25 years.

Yet as he knew from his own experience, university was about more than the lecture hall. In the late 1980s, he helped establish Evatt House, a residential college on campus aimed at students from rural areas. He was also the college's first warden, working with, and helping, the young residents.

It was for his work at the university, "for significant service to tertiary education, particularly through higher learning opportunities for young people in rural areas", that Bernard Curran was appointed a Member of the Order of Australia in 2018.

The same year, he received the university's Alumni Award for Exceptional Community Service.

While Bernie appreciated the recognition, it was the reward of human interaction that motivated him. Long after he retired from lecturing, Bernie Curran remained connected to the university community, particularly to the students at Evatt House. And they remain connected to him.

Sitting on the hill on Saturday afternoon, watching the rugby game, were dozens of past and present residents of Evatt House. Among them was Alex Crelley, a past president of Evatt House, who recalled meeting Bernie in 2019, when the education student had arrived from the NSW Riverina town of Leeton.

"I was captivated when he was speaking, and everything he asked, he remembered the next time we spoke," said Mr Crelley. "He always wanted to learn about the residents.

"He essentially started the country kids' college here, and it has such a sense of community and camaraderie, and he established and galvanised that." 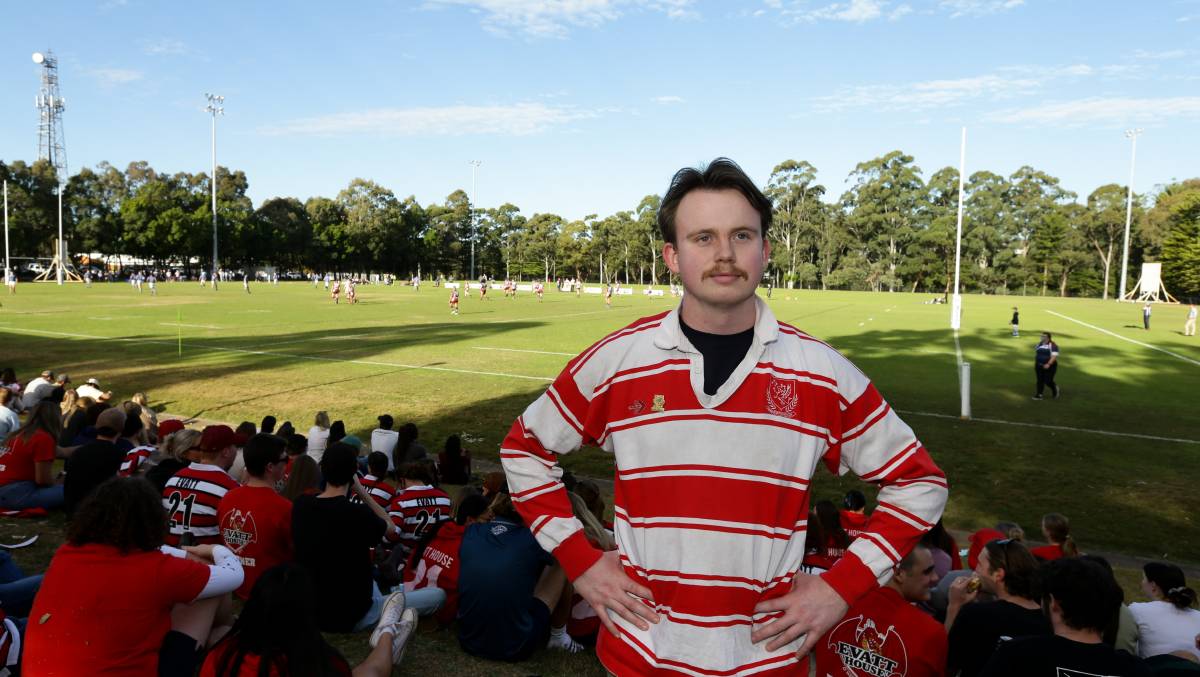 Standing behind the goal posts, coaching the forwards, on Saturday was former player and medical researcher Associate Professor Matt Dun. Like so many involved with the club and the university, Matt Dun felt a debt to Bernie Curran for all the advice and encouragement he had given on campus and beyond. And he was feeling deep loss.

"We've lost a statesman and a gentleman," Professor Dun said. "His whole ethos was built around integrity and loyalty."

As he watched his team tussling with the Wanderers, Matt Dun noted that Bernie's focus wasn't on who won a game.

And that was another of Bernie's approaches to not just a rugby game but life. A university player pats Bernie's jersey as he runs onto the field with his teammates. Picture: Jonathan Carroll

"He's just a wonderful human being," said Col Whitehead, one of Bernie's closest friends and university colleague. "His life was really one of service and empathy for other people.

"He would never turn his back on anybody who called on him for help or support."

In some ways, Col and Bernie were from different worlds. Col taught modern languages while Bernie was immersed in ancient cultures. Col was a fine cricketer, just about as far removed from a rugby forward as you can get in sport.

But for more than 40 years, they were great mates, participating in fun runs together when they were younger before taking up rock fishing. They would cast from Susan Gilmore Beach and travel to South West Rocks, not so much in the pursuit of fish but the joy of life.

"As we often said, the important thing is not the fish you catch but the people you're with and the environment you're in," Col Whitehead said. Before Saturday's match, word of Bernie's death rippled through the community, and what washed back were shockwaves.

With a "heavy heart", University of Newcastle Vice-Chancellor Alex Zelinsky sent a message to staff, telling them Bernard Curran had died.

"Bernie was a great contributor to our University and to the community, and I know that he would have continued to serve for as long as he was able," Professor Zelinsky wrote. "His untimely passing is a loss for us all."

Merewether remedial massage therapist David Cossettini got to know Bernie Curran firstly as a client. But as so often happened with Bernie, the client became a friend and, through long conversations, it wasn't just the therapist offering remedies and easing pain.

"I looked forward to his visits," said David Cossettini. "We had good, deep chats about all facets of life. That will be missed. He'll be missed." The sign at the university oval that recognises Bernie Curran.

Standing sentinel on the sideline on Saturday was Bernie's jersey - Number 8 - which had been retired for the day. Before the first-grade game, both teams and the crowd stood for a minute's silence.

As the ground announcer said, "He is absolutely irreplaceable to us."

President Warren Watson said further tributes were being planned, including the possibility of putting Bernie's name and club player number, 147, on each jersey.

Not that his name needs to be on a jersey or even on an oval sign to be remembered. Bernie was there on Saturday. And he always will be.

"He's here," uttered Doug Absalom as he gazed at his fellow spectators and the players on the field.

Read more: 'A loss for us all': Zelinsky pays tribute to Bernie Curran