AS he was lowered into the cockpit of the Spitfire, Sid Handsaker's eyes gleamed, his heart soared and the years flew away.

He reached for the control stick and recited some take-off checks, as though it was only yesterday that he was last sitting in the iconic fighter plane.

Those procedures were seared into his memory in the most tense of classrooms. For Sidney Handsaker was a Spitfire pilot during World War II, serving in the skies over Europe.

Looking on as Mr Handsaker sat in the pilot's seat was another veteran of the air war over Europe, Charles "Clem" Jones. The fire in the belly of a pilot remained after more than 75 years, as Mr Jones joked to his flying mate, "You're just a show-off!" 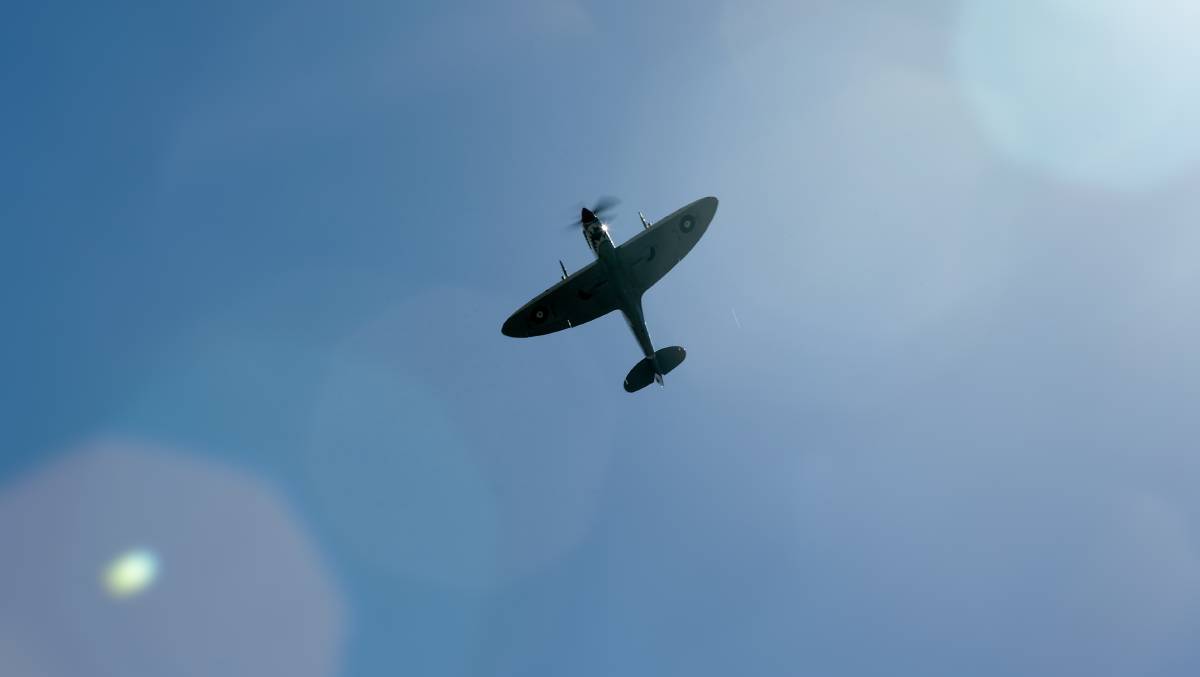 FLYING HIGH: A Spitfire performs a manoeuvre above RAAF Base Williamtown.

As a pilot who amassed hundreds of hours in a Spitfire during World War II, Mr Jones also remembered the take-off routine without a hitch - and he recited a slightly naughty ditty, designed to ensure he never forgot those letters. Not that he ever would.

"Just one of those things that sticks in your mind always," said Mr Jones.

Sid Handsaker and Clem Jones, along with their families, were invited to the Royal Australian Air Force base and the Fighter World aviation heritage centre at Williamtown in NSW's Hunter Valley this week for what was a celebration of the century. Actually, several centuries.

The RAAF was formed 100 years ago, Mr Handsaker turns 100 in November, and Mr Jones becomes a centenarian on Friday.

"I'm that excited about being here," said Mr Handsaker, adding that he was delighted to see Mr Jones again, as it had been some time.

"We don't get to fraternise as much as I'd like." Clem Jones, of Rutherford, and Sid Handsaker, from northern Lake Macquarie, are among the last remaining Australians who were Spitfire pilots during World War II. Which was why the RAAF was keen to honour the pair, saying "thank you" for all they had done.

As one of the event's organisers, Wing Commander Linda New, said, "We don't have many World War II Spitfire pilots left in the world."

The general manager of Fighter World, Bernie Nebenfuhr, welcomed the veterans, telling the pair "it's truly wonderful and a privilege to have you here", on a day when history was being celebrated, with the RAAF's centenary and the Williamtown base being 80 years old.

But it was the shock of the new that rattled the former Spitfire pilots' eardrums, as a line of F-35A Lightning II stealth fighters, Australia's latest weapon in the air, took off.

"It's incredible to see the amount of things that have happened in the air force since those days," said Mr Handsaker. "I can't believe it." Then came a sound both men knew so well, a sound from the past.

It was the engine of a Spitfire Mk VIII, flown up from the aviation museum at Temora, the air base in south-west NSW where Clem Jones did his elementary training in 1942.

The Spitfire, built in 1944 and named "Grey Nurse", had come to salute the veterans, performing manoeuvres in the near flawless sky. The two old pilots looked up in wonderment. As the Spitfire swooped in front of them, Clem Jones made the "OK" sign with his fingers and smiled.

"Unbelievable," said Mr Handsaker. "It's good to see it, and it's good to hear it.

"Wish I was up there. That would be lovely!"

At the Spitfire's controls was Flight Lieutenant Guy Bourke, from the RAAF's No. 100 Squadron. He was delighted to be putting the historic fighter plane through its paces "to honour our veterans who flew in combat". Not that either man felt heroic.

"I just think of the times when we were able to do it, and not advanced in age, as we are now."

Sid Handsaker enlisted in the RAAF in 1942. He was sent to England to train as a fighter pilot and can vividly remember the first time he flew solo in a Spitfire in January 1945. As he wrote in his memoir, The Ancient Airmen, "I had never felt such force before".

Part of that force was the tugging on a pilot's heartstrings by the Spitfire. He fell in love with the machine, a love that has lasted more than three quarters of a century. It is a love he shares with Clem Jones, who has called the Spitfire "as good as you could get".

During the war, after his initial training, Clem Jones was sent to Canada, earning his pilot's wings in 1943.

He then sailed onto Britain. He was posted to the Royal Air Force's No. 1435 Squadron, flying Spitfires in many missions, particularly over Italy.

"They're the F-35 drivers of their day," said Wing Commander Rick Dyson. "The aircraft they flew was the state-of-the-art, leading aircraft of its type and capability of its time."

Wing Commander Dyson was among a group of current servicemen and servicewomen asking questions of the veterans and listening to their stories. 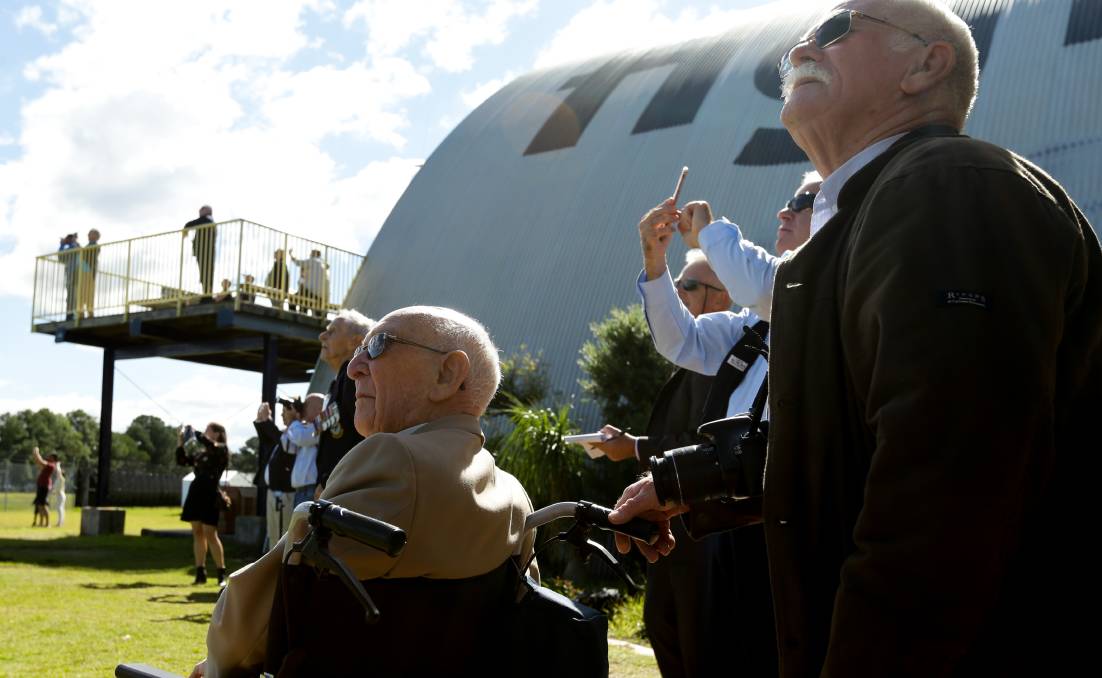 Clem Jones told Wing Commander Dyson about the time in 1944 he blacked out at about 10,000 metres, when the Spitfire's oxygen system had frozen, after chasing a couple of German fighters. His plane went into a spiral dive, and he came to and regained control of the fighter only about 600 metres above the Adriatic Sea.

Rick Dyson gasped and said, "You shouldn't be here, mate!"

Wing Commander Dyson, who has been in the RAAF for almost 43 years, said afterwards, "Just to have them here and hear what they've got to say is pretty special."

A present-day RAAF pilot, Flying Officer James Bailey, was not just a tour guide for the veterans but a keen audience for any Spitfire stories.

"Everyone knows the Spitfire, don't they?," Flying Officer Bailey said to Mr Handsaker.

"It's amazing," the former pilot replied.

Flying Officer Bailey said talking with the veterans was a reminder of how much the RAAF, and aviation, had changed in less than a century.

"We've now got an F-35 with one person, doing the job that a squadron of Spitfires did," said Flying Officer Bailey. "To have guys here who were at the forefront of aviation is an honour." 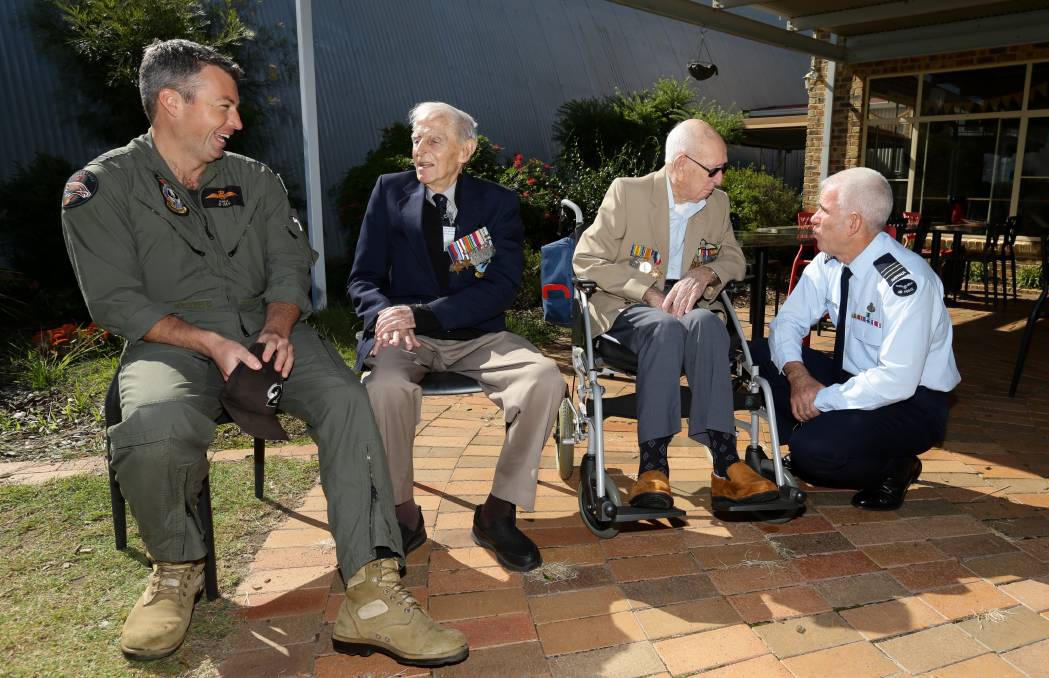 After being shown a replica Spitfire in a Fighter World hangar, Mr Jones and Mr Handsaker were escorted onto the base so they could be reunited with an old love, as well as see up-close the new face of air warfare.

The RAAF had arranged a static display of the "Grey Nurse" Spitfire and an F-35A Lightning II, with the past and present fighter planes facing each other.

"It's a beauty," said Mr Jones as he looked at the sleek modern fighter, adding that he still preferred "the one that I know".

"I never thought I'd see one, or hear one again," said Mr Handsaker, as he drank in his view of the Spitfire.

"I"m taking the keys out, in case you take it for a fly," said Wing Commander Bourke, who then made Mr Handsaker an offer he couldn't refuse. 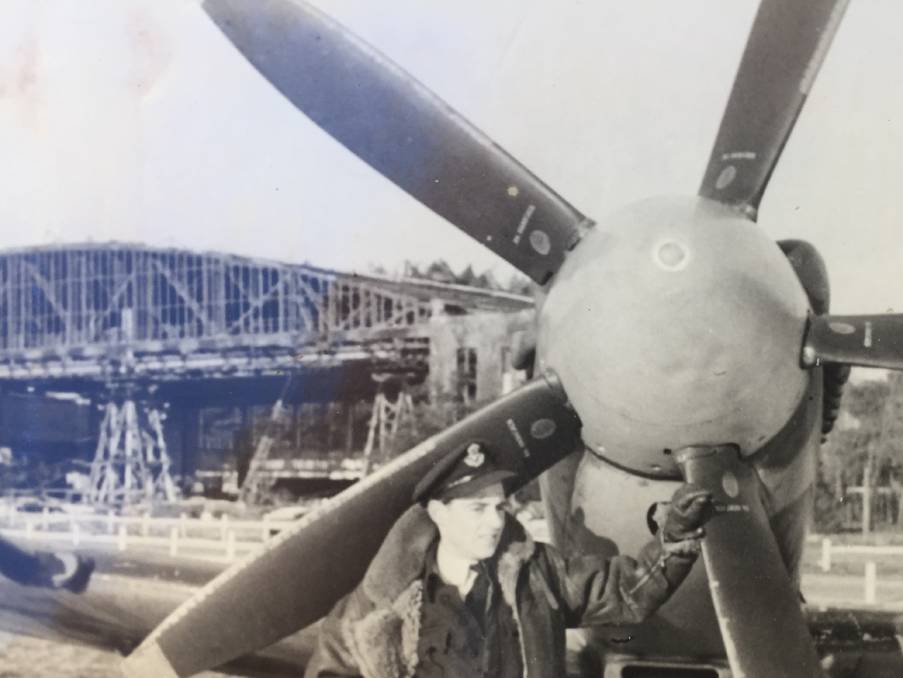 And so with the help of the RAAF officers and his sons, Greg and Rod, Sid Handsaker found himself in the pilot's seat once more.

"I never want to get out!," Mr Handsaker said.

Looking on, Wing Commander Dyson commented, "This is one of the best days of my air force career."

While Charles "Clem" Jones will officially celebrate turning 100 on Friday, by holding a lunch with his wife of 75 years, Freda, family, and friends, he felt as though he had been given an early birthday present.

"It's been quite exciting," he said.

Sid Handsaker had a 100th birthday message for his fellow Spitfire pilot: "All the best, and I'll shortly catch up with you - in November!" Clem Jones with messages of congratulations from the Queen, Prime Minister Scott Morrison and the Governor-General, David Hurley, for his 100th birthday. Picture: Jonathan Carroll

"I won't be able to sleep for a month," Mr Handsaker said.

"How am I going to keep my feet on the ground when I get back [home]?"

But for those who spent a few hours with two of Australia's last remaining Spitfire pilots from World War II, new memories were created, and new heights of gratitude were reached.

"What they did for us, and for our freedom," said Wing Commander Linda New. "To paraphrase Winston Churchill, so much was owed by so many to so few.

"And we had two of the few among us today." 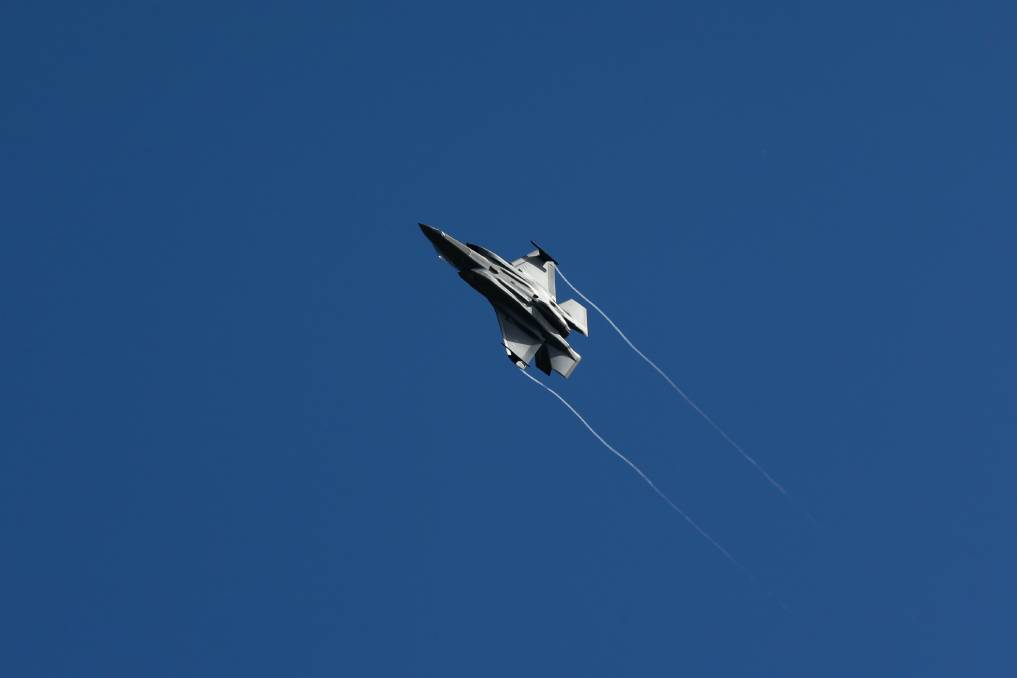