A stressful job in hospitality and a bout of homesickness led two of Hillwood Berry Farm's permanent workers to the farm door.

Peter Newby moved to Launceston about five years ago to find a less stressful job than the one he left as a chef on the mainland.

George Town man Bryce Gale had moved to Queensland and was working in his uncle's tree lopping business, but made the switch back to Tasmania after becoming homesick.

Looking for work, the men signed on to be fruit pickers, Mr Newby in 2015 and Mr Gale in 2016, and after only a few months both gained full time, permanent employment.

They said they wanted to help shed some light on what farm work was really like to encourage Tasmanians to sign up for the thousands of jobs on offer this year.

Tasmania's fruit harvest is likely to be impacted by the COVID-19 pandemic if Tasmanians don't apply for the jobs, as interstate and international seasonal workers will not be able to come in the droves they have before.

The state government has launched an agricultural jobs campaign, to get recently unemployed or underemployed Tasmanians to give fruit picking a chance and to help the sector during peak harvest season.

However, a historical stigma is still attached to agricultural jobs, the employees at Hillwood Berry Farm and other horticulture stakeholders believe, which is stopping people from getting their hands dirty..

Mr Gale said he didn't know anything about what farm work would be like before he signed on to be a picker, but it was a word-of-mouth conversation he had with a childhood friend. 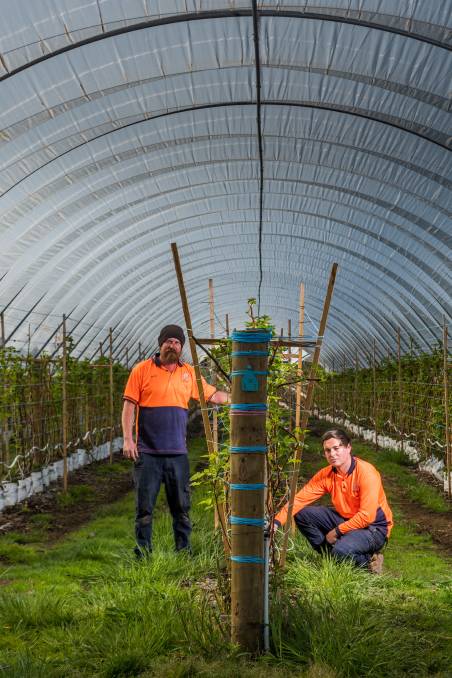 GIVE IT A GO: Hillwood Berries irrigation manager Peter Newby and non-harvest management Bryce Gale started their careers as pickers.

"My friend had signed on about a month before me, and he told me that I should put my name down, so I did, and here we are," he said.

Mr Gale said agricultural work was varied and fruit picking could be a stepping stone to other more stable employment.

He said people should consider applying for farm jobs, because the opportunities were endless, and it was challenging but enjoyable.

As a harvester, he said, he wasn't outstanding.

"I wasn't too great myself, I was pretty slow, but it was a good experience, and you can make it your own," he said.

"You get to meet so many people, and it was a different experience to learn new skills."

Mr Gale is employed as a non-harvest manager and works in maintenance, as well as doing work that is not harvest-related, such as constructing the tunnels the plants grow underneath.

He said during that work he got to mix with a variety of different people. Still, he especially enjoyed meeting the international seasonal workers, who share their culture and experiences with the locals.

"It's cool to learn the languages and meet everyone," he said.

Mr Newby followed his brother to Tasmania in 2014, after leaving a stressful job in hospitality as a chef.

"I love working outside, and I started as a picker, but after a couple of months they asked if I wanted to start on full time," he said.

He said farm work was less stressful and now he was full time he had regular hours, but he'd also learned a lot.

Before he was working at Hillwood, Mr Newby thought farm work was about being around sheep and cows, but he'd been pleasantly surprised at how versatile and unique the duties were.

The pair said they thought there was a lack of awareness among jobseekers about agricultural jobs, and that people often thought it wasn't the right type of job for them.

"People probably think it's not for them because you start slowly. At the start, you're not picking a lot, but once you get the hang of it and pick a bit quicker, you can see the benefits," Mr Gale said.

They said they would both encourage Tasmanians to take the opportunity and apply for the jobs.

"You can have good employment, it might be broken up, being seasonal work, but if you show up, rock up every day and show that you want to work there is work all year round for you," Mr Gale said. Typically, Hillwood harvests 1300 tonnes of strawberries, 350 tonnes of raspberries, 250 tonnes of blackberries and 20 tonnes of blueberries per season, which requires a sizeable workforce.

He said if the workforce wasn't there, the business might have to shut down entire runs of crops and leave the plants and fruit to rot.

Tasmania's horticulture sector has traditionally relied on the interstate and international seasonal worker market to fill the positions needed, but because of the pandemic, that wouldn't be an option.

He said agricultural work was inherently hard work, which is where the stigma came from, and while it wasn't the right fit for everyone, he encouraged people who thought they could do the role to apply.

"We need people who are motivated, and who want to give it a go."

Hillwood is in negotiation with the state government regarding some interstate workers, who they hope can return to the state.

The workers are interstate after the farm found them work elsewhere, but border controls mean that they would require hotel quarantine, which would be paid for by the business.

Mr Dornauf said if they had to pay for the quarantine, it would put them $700,000 in the red before the season began.

"If we had a good season, we'd be looking at only breaking even, and it's stressful to be always playing catch up," he said.

Interstate seasonal workers play their role, but Tasmanians will also have to play their part to help get the fruit harvested.

He said there was a real opportunity for some recently unemployed or underemployed Tasmanians to try something new.

"Livelihoods rely on getting the fruit off the trees and the product out of the ground," he said.

The state's horticulture industry employs 1400 ongoing jobs and is worth $300 million to Tasmania's economy.

Mr Cornish said the industry needed to "tell a better story" to locals, to let them know the jobs are worthwhile and not as bad as in the past.

"It used to be known as back-breaking work because all the fruit and vegetables were on the ground, but thanks to technology that's not the case anymore," he said.

"All the berries are now on tables at waist height, and while some of the vegetables are in the ground, you can find a product that works for you, if you can't get down, you can always do berries, or thin apples."

This story Want to know what a fruit picking job is really like? first appeared on The Examiner.